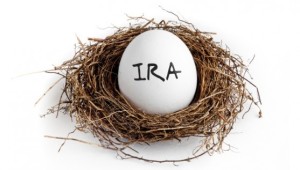 After the death of the individual who sets up an individual retirement account (IRA), the beneficiary has a few choices. Often beneficiaries select the funds to be received as an inherited IRA so that instead of paying taxes immediately, the funds could grow (deferring taxation) over the lifetime of the beneficiary. So, for example, if a 40 year old inherited $40,000 from an IRA, they could chose to keep the $40,000 as an IRA (instead of paying taxes immediately on the $40,000) although they would be required to make minimum distributions over the life expectancy of the 40 year old (instead of waiting until the year after age 70½ if they set up their own IRA). So, if a 40 year old has a life expectancy of 40 years, then roughly (although there would be recalculation annually) $1,000 would be taken out annually and only that amount would be subject to tax annually.

The U.S. Supreme Court held (Clark v. Rameker) that inherited IRAs are not “retirement funds” within the meaning of federal law since the characteristics are different as a traditional IRA. First, the holder of an inherited IRA may never invest additional money in the account. Second, holders of inherited IRAs are required to withdraw money from accounts – no matter how far they are from retirement. Finally, the holder of an inherited IRA may withdraw the entire balance of the account – and use it for any purpose – without penalty. Additionally, bankruptcy protection is afforded a traditional or Roth IRA since it ensures that debtors will be able to meet their basic needs during their retirement years. However, an individual with an inherited IRA is not prevented or discouraged from using the entire balance immediately after bankruptcy for consumption without delay.