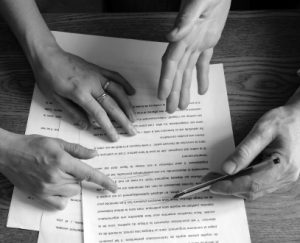 At the present time, most nursing homes require residents or their “responsible party” to sign a nursing home admission agreement which binds the resident to arbitration instead of giving them the right to sue the facility if the facility is either negligent or is in breach of contract. Most litigation attorneys indicate that arbitration is much more favorable to the facility than defending a lawsuit. Often facilities require this as a condition to admission to the detriment of the residents and their families. Many residents and their families just sign the agreement and have no idea of the loss of their rights if an actionable offense should later occur.

As a result, fifteen attorney generals (AGs) have indicated in a letter to the Center for Medicare & Medicaid Services (“CMS”) urging a ban on such pre-dispute admission clauses since “it deprives residents and their families of their state law rights to judicial relief”. The letter further indicates that the clause leaves families with “a take it or leave it” conundrum and that quality of care should be paramount – not the limitation of damages by a facility. The state AGs in their letter further indicated that the only way to truly prevent abuse by arbitration clauses is to prohibit them entirely. The U.S. House of Representatives and Senate have also called upon CMS to end this practice.