23 Oct SUCCESS STORY OF THE MONTH 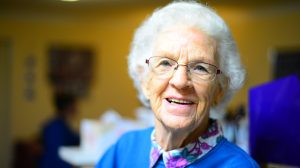 The daughter of a Medicaid applicant came to our office in August in dire need. Her mother had to enter a nursing home around April 2017 and she had very limited resources (just a few hundred dollars and a small insurance policy). The nursing home asked the daughter to sign the nursing home admission contract on behalf of her mother (which daughter did) and told her not to worry as there would be governmental assistance. The facility also advised the daughter that the facility would handle the Medicaid application so that the government would help pay for mom’s nursing home care (a single person typically only gives up their income, usually Social Security and/or a pension, and the government pays the nursing home the balance through Medicaid) as neither mom nor daughter could afford to pay privately ($5,000-$6,000 per month). The nursing home applies for long-term care as promised, but when the government asked for additional information the facility failed to respond (without telling either mother or daughter) it results in a denial of Medicaid benefits. Medicaid was also denied since the life insurance policy had a cash surrender value of around $1,900 which combined with the few hundred dollars mom had in the bank resulted in Medicaid ineligibility since her total countable resources exceeded the $2,000 resource limit for a single person.

As a result, the nursing home told daughter that if she failed to pay them the balance of the nursing home bill in the amount of $14,000 (they were holding her personally liable for her mom’s care since daughter signed the nursing home admission contract as her personal representative) within two weeks that her mother would be evicted in addition to the $14,000 for the services not paid to date.

Daughter comes to us about 75 days after the denial of Medicaid. Under the Medicaid rules, you have 90 days to either appeal or re-open the case.

Under the law, a Medicaid applicant cannot be evicted while a case is still pending. So, we first reopened the case so mom could not be evicted. Next, we got the information the state requested (which the nursing home failed to request of either mom or her daughter). Finally, the biggest question was how to “undo history” since mom was over the $2,000 countable resource limit on the first day of each month (the date that Medicaid determines resources for Medicaid eligibility) when you combined her checking account of a few hundred dollars and her life insurance policy that had a cash surrender value of $1,900. Although infrequently used, there is a Medicaid rule that you can designate an account as a burial fund up to $1,500 and it could be done retroactively. As a result, we simply advised the daughter to make a prior designation of the life insurance policy as a burial fund. The government then approved Medicaid and the nursing home did not evict mom as the facility will eventually be paid by the government for the last several months (under the rules, you can only go back three months when there is a failure to provide information and the nursing home failed to provide information as indicated above). Although this case did not involve a large amount of money, the threat of evicting of mother and the payment of $14,000 to the nursing home (which neither mother or daughter had) meant the world to daughter – which is why we have selected this as our success story of the month.