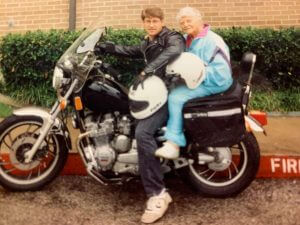 In Memory of “Grandma Gussie”

Some of the following are true stories about my wife’s feisty 107-year old Grandmother, affectionately called “Grandma Gussie”. Some of the stories are simply fictional or just humor regarding the elderly. I want to encourage anyone to send me their stories or jokes concerning the elderly.

Grandma Gussie has always been confident that she would live a long life. After my father-in-law died, Grandma Gussie was sitting in the house of her daughter Barbara (my mother-in-law), along with 3 of her grandchildren (including my wife) and myself. Her daughter, Barbara (who had recently visited the Ft. Worth grave of her deceased husband and knowing that none her children would remain living in Ft. Worth), cried with anguish, “Who will visit me when I die? Who will visit my grave?” Grandma Gussie replied, “I will!”

Even at 102, Grandma Gussie is confident she will live a long life. Recently, Grandma Gussie bought a new (although off-brand) sewing machine. She asked her daughter, “Where is the warranty?” Her daughter replied, “Why do you care? It is a 25-year warranty.” Grandma Gussie replied, “How do I know the company will be in business that long?”

One of Grandma Gussie’s relatives recently went to an estate planning attorney in California. The attorney asked the 67 year old relative, “When did you say your father died?” The client relative said to the attorney, “Did I say my father died? My father is 87 years old and is in perfectly good health.” The attorney said, “Excuse me,” and then asked, “When did you say your grandfather died?” The relative client then said, “Did I say my grandfather died? My grandfather is 107 years old, is in perfectly good health and, in fact, just recently got married.” The surprised attorney then asked, “Why would a 107 year old man want to get married?” The client relative replied, “Did I say he WANTED to get married?”

Grandma Gussie was once driving down Interstate 30 (I-30) with a couple of her elderly friends who were in the backseat of her car. A police officer pulled her over and said, “Ma’am, did you know you were driving too slow – you were only driving 30 miles an hour on this Interstate highway?” Grandma Gussie replied, “I was only going the posted speed limit of 30 mph.” The officer replied, “No. That is the number of the highway (I-30)-not the speed limit, but I am only going to give you a warning this time.” The police officer started to walk away when he noticed the frightened look of Gussie’s passengers. He stated, “I did not mean to scare you, ladies, by threatening to give a ticket.” The passengers responded, “Officer, you did not scare us. Gussie just got off of I-95!”

Gussie, then only in her 90’s, and Leon, a few years her elder, were all excited about their decision to get married. They go for a stroll to discuss the wedding and on the way they pass the drugstore. Gussie suggested they go in. Gussie addressed the man behind the counter:

Gussie: “Are you the owner?”

Gussie: “We’re about to get married. Do you sell heart medication?”

Pharmacist: “Of course we do.”

Gussie: “How about medicine for circulation?”

Gussie: “How about Viagra?”

Gussie: “You sell wheelchairs and walkers?”

Pharmacist: “All speeds and sizes.”

Gussie says to the pharmacist: “We’d like to register here for our wedding gifts, please.”

Grandma Gussie is very optimistic on having a long and full life. During the past holidays (just before turning 107), she was given a new nightgown by her friend Sarah since the one she wore was not warm enough. When Sarah came by to see Gussie, she noticed Gussie was still wearing the old nightgown even though it was cold outside and she asked Gussie where the new nightgown was. Gussie told Sarah the new nightgown was hidden behind her door. Sarah asked Gussie, “Why aren’t you wearing your new fleece-lined nightgown that will keep you warm?” Gussie replied, “Sarah, the nightgown you gave me is very nice. However, it is possible I am might get married again, so I would like to save it for that time.”

If you have jokes relating to being elderly, please e-mail to dongi@dallaselderlawyer.com or see our blog which can be contacted as indicated on the home page. I need new material! It’s tough without feisty (but lovable) Grandma Gussie.